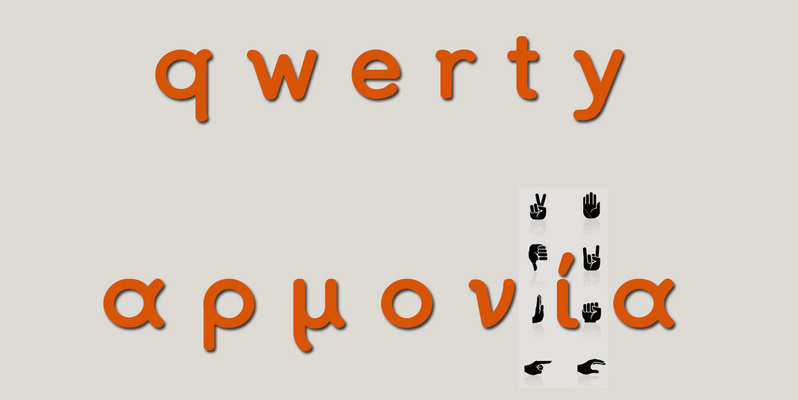 «Language is of all social institutions, the least amenable to initiative.
It blends with the life of a society, and the latter, inert by nature, is a prime conservative force.»
Ferdinand de Saussure, Course in General Linguistics, 1916.

«The language in which we are speaking is his before it is mine. How different are the words home,
Christ, ale, master, on his lips and on mine! I cannot speak or write these words without unrest of spirit.
His language, so familiar and so foreign, will always be for me an acquired speech.
I have not made or accepted its words. My voice holds them at bay. My soul frets in the shadow of his language.»
James Joyce, A Portrait of the Artist as a Young Man, ch. 5, 1916
[Joyce explains from the point of view of a (non Gaelic) Irishman what it feels like to speak in English.
In today's globalized world, for someone speaking a language of minor diffusion, like Greek, the feeling is exactly the same.]

«An emancipated society, would not be a unitary state, but the realization of universality in the reconciliation of differences. Politics that are still seriously concerned with such a society ought not, therefore, propound the abstract equality of men even as an idea. Instead, they should point to the bad equality today, the identity of those with interests in films and in weapons, and conceive the better state as one in which people could be different without fear.»
Theodor Adorno, Minima Moralia, No 66: «Mélange», 1945.

«[Britain is a] global power with worldwide interests thanks to the Commonwealth,
the Atlantic relationship and the growing use of the English language.»
Malcolm Rifkind, British Foreign Secretary reported in the «Observer», 24.09.1995.

«In the coming decade professionals will need to master the language and understand the culture of at least another country in a global society. [...] Innovative applications in this field will offer a much larger number of students or professionals the opportunity to gain awareness of different cultures. They will therefore be prepared to work effectively in the global market place. [...] Primary education may benefit a bit later from network based language learning preparing children for globalisation.»
Document quoted from a G7 meeting; Tel Lingua Conference, 7-8 Oct. 1996:
«Proposal for a feasibility study: operational plan for a global communication platform
for network based transcultural and language learning and the language industry “GETALL”».
Proposed by France, Germany and Italy on behalf of the European members and observers.
Support by DGXIII of the European Commission.

«It is particularly important, even for English language writers, that the translation and dissemination of books to other countries should not be left to unfettered market forces with the resulting globalization of best-sellers
at the expense of the immense variety of European literary creation.»
The International Conference and Workshop on Legislation for the Book World,
Council of Europe Publishing, 1997, p. 55.

«All persons have the right to express themselves and to create
and disseminate their work in the language of their choice, and particularly in their mother tongue;
all persons are entitled to quality education
and training that fully respect their cultural identity.»
The UNESCO Universal Declaration on Cultural Diversity,
Article 5, Paris, November 2001.

«To counter the concept of a Central Europe, I came up with the expression “Extreme Europe” that served as our manifesto during the years in Strasbourg. It was a question of changing the point of view about Europe. In contrast to the Mitteleuropean ideology, culture in its modernity has always come from the peripheries of Europe, from its border zones, zones where languages and cultures touch. Andric, Pessoa, Joyce, Kafka, and Borges too –these are authentic European citizens, whose language, identity, and narratives are in transition. If there is one question that is common to all the great artists of Europe, it is this concern with, this being haunted by boundaries, frontiers, borders weighed down with history and signs where the identity of paradoxical frontiers is forged; this is precisely where the whole problem of defining European identity lies.

What we call Extreme Europe was therefore neither geography nor a concept, but a metaphor of movement by which we escaped from the enclosure of identity. Ceasing to think Europe across the Central European metaphor, abandoning the fantasy of an unattainable identity and reconnecting with a plural Europe, a Europe whose intensity zones would no longer be places where power is wielded or institutions are weighed down by memory, but rather gravitation centers for experience.
Turning our back on the idea of a culture of identity and patrimony in order to
be open to the experience of otherness, overture, and incompleteness.»

Becoming a Minority: For a new politics of literature
Christian Salmon interviewed by Joseph Hanimann, Denoël publishers, Paris 2003
(Translated from the french by Marjolijn de Jager for the
«Autodafé/The Censored Library» (www.autodafe.org).