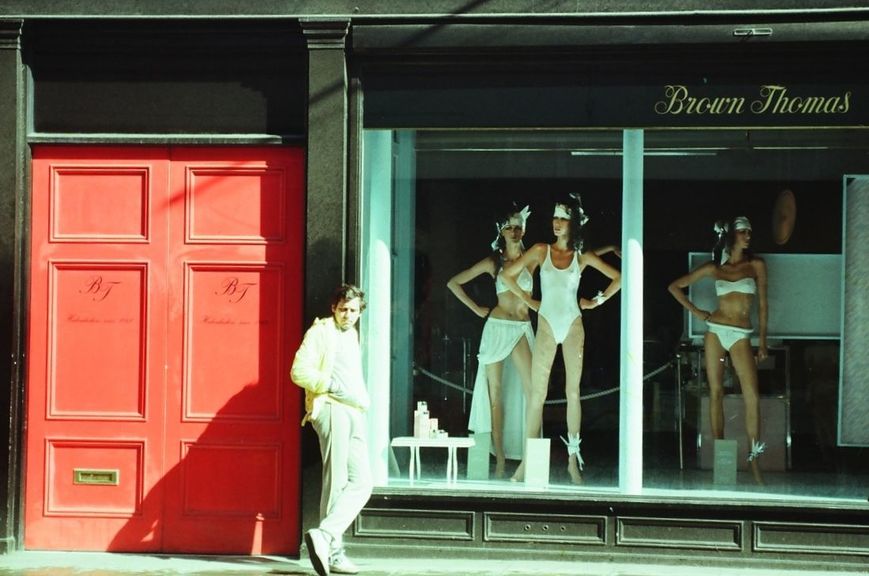 The author in Dublin (during one of his first trips to Ireland) in front of the famous windows of Brown Thomas (circa 1984).
He passed, dallying the windows of Brown Thomas, silk mercers. Cascades of ribbons. Flimsy china silks. A tilted urn poured from its mouth a flood of bloodhued poplin: lustrous blood...     Gleaming silks, petticoats on slim brass rails, rays of flat silk stockings...  High voices. Sunwarm silk. Jingling harnesses. All for a woman, home and houses, silk webs, silver, rich fruits, spicy from Jaffa. Agendath Netaim. Wealth of the world. A warm human plumpness settled down on his brain. His brain yielded. Perfume of embraces all him assailed. With hungered flesh obscurely, he mutely craved to adore (Ulysses, 8th episode). 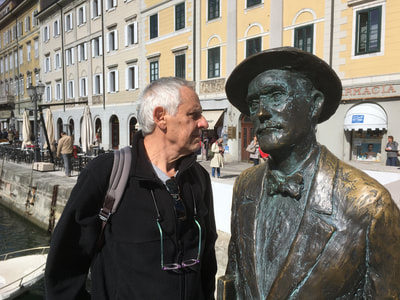 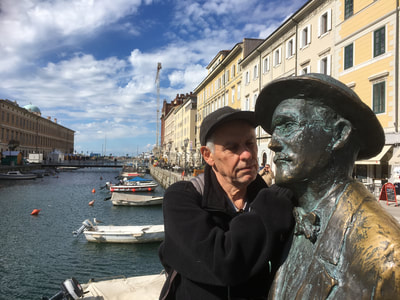 Τhe author in Trieste (via Roma 16, in front of the Canal Grande) next to Joyce's statue, a work by the Trieste-born sculptor Nino Spagnoli, which was erected on the bridge in 2004 to celebrate the 100th anniversary of Joyce's arrival in Trieste.
Two more books on Joyce
Giacomo Joyce – Dear Dirty Dublin

Giacomo Joyce, in a totally revised translation, with a new introduction ("Mr James Joyce and Mr Jacopo Zois") with fresh comments to the text based on recent bibliography and research is published again in a new edition by Topos books on May 2018. 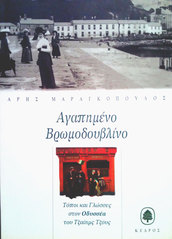 'Dear Dirty Dublin', cover.
Though Dear Dirty Dublin is a famous quote that first appeared in Dubliners, A.M.'s book bearing that title is a pictorial study of Ulysses.* Following the strict structure of Ulysses, the book is composed of an equal number of chapters where black and white photos highlight facets of the novel. Short passages from Ulysses, translated by A.M., add to the reader 's enjoyment as they underline in harmony with each photo the concept and the beauty of the quoted text. In this way the reader of Dear Dirty Dublin, even by flipping through the pages, enters picture after picture into the realm of the complicate Joycean topography. And by reading the selected passages he savors the beauty and the power of the original language.
A.M. 's book is not meant as a pictorial guide to Dublin;  it is more an exegetical guide to the labyrinth of Ulysses. The photos below, excerpts from this book, stand as a proof to this statement. The book was published two years after the first edition of Ulysses, a Reader's Guide, in 1997.
-----------------------------------
* In Dubliners the phrase is attributed to a certain reporter named Ignatius Gallagher (in the story: 'A little cloud'). The event is then re-worked magnificently in Ulysses (the 7th episode). 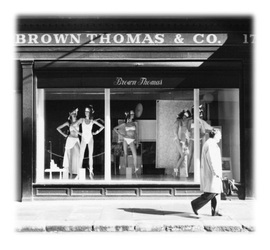 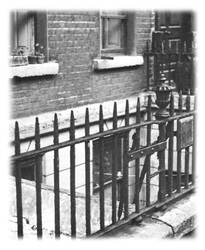 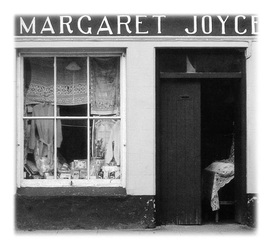 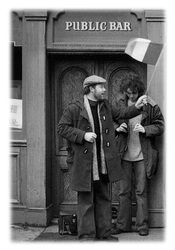 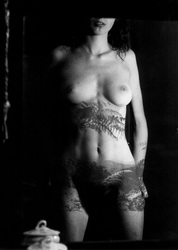 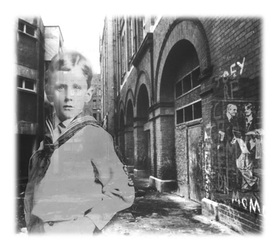